P6 have found an interest in beach cleaning and decided to adopt the West Bay in Helensburgh.

Last term, Primary Six went out and collected a whopping 360kg of waste from the West Bay and enjoyed it so much that they decided to adopt the beach. “It seems very exiting because we’re doing something for the environment,” said a P6 after their first beach clean.

After they adopted the beach, some P6’s took P3’s down to the beach during Eco Week and taught them how to clean a beach. As well as sharing their learning with P3, P6 also did a live-stream back to the school during the eco assembly to update everyone on their progress.

We wish them good luck on their future beach cleans. 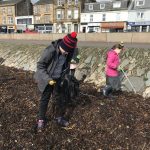