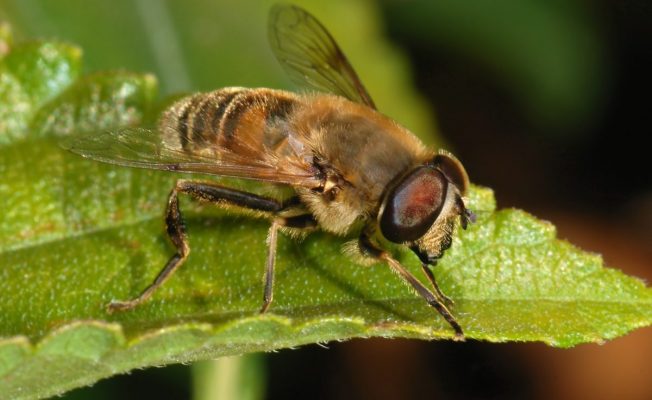 The Gardening Club assembled at the Grant St entrance to Hermitage Park on a beautiful spring day, where they were met by the Park Warden, Melissa. She had invited us to enjoy a ‘surprise’ schedule!

The children met Dave, the ecologist and tree surgeon, who operated a Cherry Picker. He described a wildlife habitat he had engineered in a horse chestnut tree.  He had sculptured it expertly with his chain-saw to provide a natural looking ‘dying’ tree. 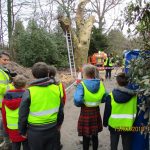 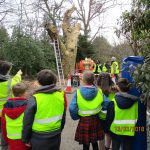 Dave wore a sit harness when using his chain saw & we were shown this.

We were dressed for the occasion in high-vis jackets and offered a spare pair of ear protectors – useful when the chain sawing began! We were kept safely cordoned off then.  Others used their hands to muffle the noise. 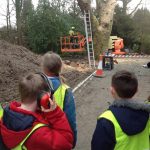 We saw the carefully engineered bat home which had been created. It is seen as two slits, at the top left of the tree, which are the entrances to the home and connect to a ‘roost’ – seen with square cross section below. 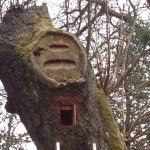 The tree surgeon’s work at the top of the tree had become riskier, when complicated by the find of a wasp’s nest (dyke) there!

Later the children are shown packing a home for insects with sections of hollow bamboo. It might perhaps attract species of bees that don’t live in hives, even solitary types, or larvae. The last cane was critical structurally to keep all firmly in place!   We are invited to bring a torch to look for the wildlife when the park redevelopment was completed. 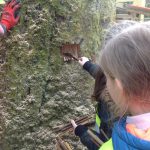 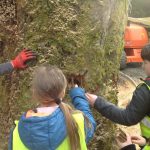 One of the children discovered a hollow at the base on the other side of the tree. It had been flooded evidently.  Bracket fungi had been growing too.

A special highlight of a very memorable visit was a first ever viewing of a rat-tailed hover fly larva, discovered there. Dave showed it’s incredibly long tail on his hand!

We finished with a ‘sneaky peak’ at the rehoused playpark, under construction. It will even boast a zip wire.